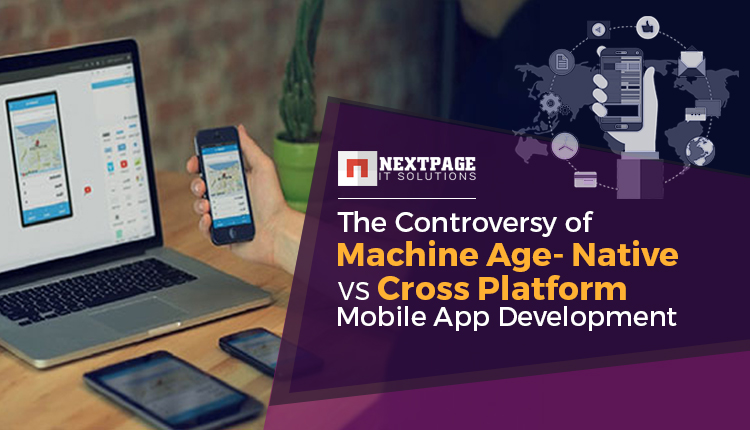 These past few years have witnessed a plethora of debates regarding comparing the benefits of native vs cross platform mobile app development. Companies have hold major controversial discussions in terms of which app development brings better revenues on the table. While both cross platform and native app development have their own pros and cons, we are here to let you decide which one is the right path for your project.

Though, the cross platform is still preferred by many companies, the native app development just takes the cake. Determining which one is the absolute better only relies on what is best for you and  your business goals.

So, in order to understand the concept  of native vs cross platform mobile app development entirely, let us get you acquainted with the reasons behind choosing either one of them.

First of all, What is Cross Platform Mobile Application Development?

Cross-platform mobile development refers to the development of mobile apps that can be used on multiple mobile platforms. You can use programming languages such as java, HTML to run the already created code on any android or iOS platform or even the windows and customize it accordingly. Simple interaction is the key here. This platform is preferred only if you do not require to access any other peripheral.

This app allows you to use a single code across multiple platforms thus saving major time for rewriting the code every time and customizing the platform, thus, more faster project completion. Consistency and synchronization is the major advantage here.

The app allows you to maximize the profits by offering you an exposure across multiple markets which can be targeted across multiple users and platforms. Thus, wider the user market, more are the monetary benefits.

The major difference between native vs cross platform mobile app development is that Cross platform mobile apps are based on the principle of “write once, run anywhere”, which is the major way of saving time which further leads to efficient working of the project. You do not require a large team of developers for a project and can cut the business costs.

4. Easy to Launch and Update

The app allows an easy launch and customizing,saving you a major deal of time as well as money. You can see the effect of changes simultaneously in every platform all at once.

Cross platform apps usually do not integrate smoothly with the platforms as compared to the native applications. They tend to freeze while communicating with the platforms, either its hardware or software, the reason being their non native nature.

Being an alien platform is one of the major reasons for Cross Platform Mobile App Development lagging behind in the debate of native vs cross platform mobile app development. There is no guarantee that the cross platform apps with a single overall code will adapt the every customization you have made to the device. It may result in the app not being able to integrate with even the simplest of features in the phone like camera or recorder, thus, hampering with their functionality.

It is the type of application development that uses platform specific programming languages. You have to built the app from the scratch itself, without using the same code again and again. They are built with the sole purpose of operating on the single dedicated platform.

The seamless integration of native apps with the platforms makes them contribute tremendously towards creating a positive user experience and encourages them to use it further. The usability of the app gets efficiently quite a lot which further finalizes the success of the product.

Native app development is specifically designed for the apps that requires major user interaction as well as processing of ample amount of data such as images, videos or animation in order to get optimum performance. The native app’s code is responsible for communicating directly with the hardware or software functions of the operating system, thus increase the usability and performance. It is one of  the major reasons for native app development turning outt to be a better platform in the debate of native vs cross platform mobile app development.

More higher is the position of your app in the app store, more are the number of viewers which can indeed turn into customers. Thus, using a native app allows you more visibility in the app stores only due to their optimum performance and user friendly interfaces.

Native apps allows the users to customize them according to their needs or specifications due to being smoothly integrated on their specific platforms. This gives the user a feeling that the app is integrated in their device itself.

You have to develop the native application for every single platform which is a rather time consuming process and will prolong the project completion. As you cannot use the same code on every platform, the programmers will have to rewrite or change the code all together.

You will need to hire multiple skilled professionals in order to develop the native apps, thus increasing the overall budget of the project. Since it requires separate codes for separate platforms, hiring the developers is a handful task.

So, here are the pros and cons of native vs cross platform mobile app development. While the cross platform focuses on getting some high number of subscriptions for the application, native focuses on the user experience.

Though having the high number of users is great, but we do know the fact that user satisfaction is the main purpose of building a mobile application. If the users are not satisfied, they might discontinue the use of the app all together, thus taking all the immense efforts down the drain.

So, it might be best to choose from either of them according to your own user and company’s requirements.

Do check out our post on How to use Bugherd for reporting bugs.